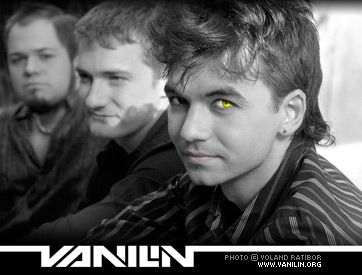 Vanilin is a project of vocalist and electronic musician Julian Bliss, who started producing instrumental works under this name in 2000. Julian revealed himself as a vocalist in 2002, by recording Gone Into Tomorrow, his first song. After three instrumental albums Julian Bliss began producing a song album. Recording of the album was participated by notable Kiev musicians including W. Angel of Conquest, Josh Olsen-Berg of Arcothon / Nolens Volens / Error::Genesis and Alex Gl of Conquest. The album has been recorded at Melogroup studio. Julian met Anna Grytsak there, who helped with management of the band’s first two performances. When the demo was finished, Bliss invited Thorny (bass-guitar) and Andrew (guitar) to join the band. The first show by Vanilin took place on Friday, 13th of July. Vanilin recently performed at the first-rate gothic festival of Ukraine Dity Nochi / Chorna Rada 4 with Gothika, Inferno, Error::Genesis, Crazy Juliet, Gray/Scale, No Existence, Cold In May and Andromeda Cryogen and at the Halloween party with Audi Sile, Inversus and Marilyn Monroe band. The next show by the band was on December 1st in Lviv on Other World birthday party.